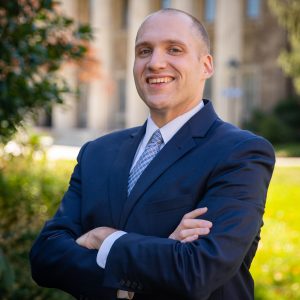 Will is an associate attorney with the firm and his practice is focused upon family law cases.  He enjoys connecting with people and helping them through some of the most difficult times in their lives.  The law is a family affair for Will as his Great Grandfather, Father, and Uncle are all attorneys.

Will is a graduate of St. John’s Catholic Prep high school in Frederick, Maryland, where he played football and lacrosse all four years.  He went on to attend Frostburg State University where he earned a BA in Political Science in 2013.  While attending Frostburg Will was involved in the Young Republicans Club. Will earned his Juris Doctorate, cum laude, from The University of Baltimore School of law in 2018.  After law school Will clerked for the Honorable Richard Sandy in the Circuit Court of Maryland for Frederick County.  While a clerk Will was exposed to many different family law matters involving some of the most difficult issues family law presents.

When not in the office, he is either spending time with family and friends, or in the outdoors.